Hit enter to search or ESC to close
Blog

We are a research group working on Genetics in a Vet School and closely collaborating with veterinary clinicians and dermatologists. We moved from specific pathogens, such as Leishmania, to specific commensals such as Demodex… and finally ended studying the whole: the skin microbiota on healthy dogs.

Vets are always wondering why there are differences among dog breeds and skin sites in relation to cutaneous diseases. So, we decided to characterize skin microbiota on healthy dogs [1].

We obtained millions of sequences, and huge amount of data. That was not enough though. The clinicians went on asking, “Which are the bacterial speciesliving on dog skin?” And we could not give an answer.

So we decided to try a new approach to answer this question. We needed to sequence longer fragments of DNA and 3rd generation sequencing seemed to be a good option. In this new study (just posted in Biorxiv) “Using MinION™ to characterize dog skin microbiota through full-length 16S rRNA gene sequencing approach” [2] we sequenced not only some specific hypervariable regions of the 16S rRNA gene (V1-V2, 300 bp), but the full-length 16S rRNA gene (1,500 bp, V1-V8 and V1-V9), as it used to be done with the classical sequencing methods to assign bacterial species. 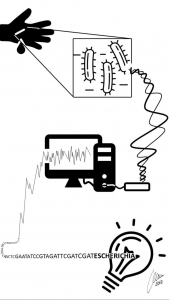 We have tried the 3rd generation sequencing with MinION(by Oxford Nanopore Technologies). It is a portable and rapid sequencer affordable with a small budget that allows real-time sequencing of the samples, which we also found interesting for its potential in clinics as a rapid diagnostics tool.

We were able to obtain taxonomy information down to species level and increased richness estimates. We detected bacterial species classically linked to dog-bite associated infections as normal and abundant inhabitants on inner pinna skin of healthy dogs.

We even saw Archaea, but with really low proportions.

This was just a pilot study trying 3rd generation sequencing. Despite it presents higher sequencing errors than 2nd generation, new kits and bioinformatics programs are being developed to increase the accuracy of the reads.

Long reads obtained with nanopore sequencing have great potential to be applied in microbiota studies, although amplifying and sequencing the full-length 16S rRNA with universal primers might not be the best approach. Other researchers have already proposed alternative methods to characterize microbiota taking profit of the 3rd generation sequencing such as: i) sequencing the whole rrn operon constituted by 16S rRNA-ITS-23S rRNA [3]; ii) sequencing the cDNA from size selected SSU rRNA [4]; or iii) sequencing other bacterial barcodes, such as cpn60 [5].

So, stay tuned… this has just begun.